The reason? It is alleged the school personnel, including his coach, Kevin Willard, and the school’s director of sports medicine, Tony Testa, failed to diagnose an injury sustained while playing a game. The lawsuit also contends the staff kept information concerning his health from the player.

On November 9, 2019, Powell took a painful misstep during the Seton Hall vs. Stony Brook basketball game, the second game of Seton Hall’s season. After only four minutes of play, Powell, who had been named by the Big East Conference the preseason Big East Player of the Year, was injured when landing on another player’s foot. He was forced to leave the game.

According to news reports, soon after Powell’s fall and removal, the Seton Hall Pirates drastically lost their early lead, trailing at half-time, 33-31. However, by the end of the game, the team recovered, winning by 17 points.

According to the lawsuit filed July 15, Testa (identified in the lawsuit as the director of sports medicine at the university and the basketball team’s physician) told Powell that he had sustained an ankle injury. Still, before the following game, he assured Powell he could play and doing so “…would not exacerbate the injury.”

Although he was scoring big, Powell’s pain got worse as days went by and spread upwards to his right knee. The lawsuit alleges that Powell expressed his concern to Testa. Testa identified the pain and told Powell he had a bone bruise, and “…to alleviate or mask the pain he would inject pain killer medicine into Powell’s knee to allow him to play and perform for the university.”

Along with Testa, the lawsuit also contends that Powell’s coach knew at all times “…the advice given to Powell by Dr. Testa, as well as his actions.”

Despite the injury (and an unrelated concussion), by the end of the 2019-2020 season, Powell had earned both himself and the school accolades by scoring more than 2,000 points during his college career. By all accounts, the athlete appeared to be a shoo-in for the upcoming NBA draft. However, scouts connected to the NBA had either suspected or discovered Powell had a serious knee injury that had gone untreated. No NBA team drafted Powell during the 2020 draft.

Powell went on to sign as a free agent with the Knicks and wound up playing for their G League affiliate, the Westchester Knicks. His lawsuit is a powerful example of how a failure to diagnose can be egregious enough to become medical malpractice.

What Is a Failure to Diagnose?

Failure to diagnose is a type of medical malpractice case in which an individual has a set of symptoms that have gone undiagnosed or were not identified correctly by a physician. Suppose the medical error results in improper medical care, the right care too late, or no care at all, and the patient’s condition worsens. In that case, it can be considered negligence, and there may be grounds for a failure to diagnose medical malpractice case.

When such a failure to diagnose leads to harm, including long-term health issues and loss of potential employment, as seen in the pending case involving Powell, there are legal ramifications the negligent parties must contend with, including medical malpractice lawsuits for the victim to receive necessary compensation.

Related: Is It Just a Headache or Something More Serious?

Currently, Seton Hall’s school administration has not spoken out directly concerning Willard and Testa’s actions. However, on Aug. 6, the defendants filed a brief in support of their motion to dismiss the lawsuit in large part due to New Jersey’s Charitable Immunity Act, which “shields educational institutions like Seton Hall and its employees and agents, from the type of liability alleged in the Complaint.”

Along with seeking damages for two counts of negligence, the suit also claims breach of contract and fiduciary duty. 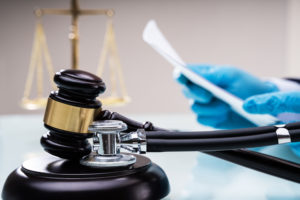